Ginger Trifle with pear compote : Inspired by a comment…

Are you a trifle lover? It has to be one of my favourite desserts, not least because it is really easy to make. Whilst there are as many variations as your creativity will allow however, this Winter Pear and Ginger Trifle has to be one of the best. Honestly! I have made and eaten a lot of trifles in my time and this one is seriously ‘up there’.

It was originally inspired by a blog comment on my Jamaican Ginger Cake post back in 2016. Katie (who at the time was blogging at Apple & Spice) said ‘Try some (ginger cake) in the base of a trifle – It’s amazing’. So I did. And she was right! All I can say is thank you Katie. This Ginger Trifle recipe is a keeper for sure and perfect for the Winter season.

What is the best ginger cake for Gingerbread Trifle?

As with so many trifles in our house, this one was also devised to use up left overs… On this occasion from the many sponges I made to perfect my original Ginger Cake recipe. If you don’t have any left overs, then make some. This trifle is THAT good, it is worth every minute of effort just to try it.

Since first making this pear and gingerbread trifle, a second recipe for Dark & Sticky Jamaican Ginger Cake has been posted on Gluten Free Alchemist. Both recipes are good and both are perfect for trifle. My personal favourite of the two however, has to be the later version (the Dark and Sticky one). But for this trifle (and whichever recipe you choose), it is important to go for a good, sticky ginger cake of the Jamaican variety. It just makes the trifle what it is!

For those who are not gluten free, the options are even more straight forward. Wheat-eaters can buy ready-made Jamaican ginger cake to make ginger trifle. To be honest, the fact that there doesn’t appear to be a ready-made gluten free Jamaican ginger cake to buy in the supermarket, makes no sense at all. But although I have searched, it remains more than elusive. If anyone out there knows where to find one, please let me know!

Pears for Pear and Ginger Trifle

What makes this ginger trifle so special is that the ginger cake has been married with a layering of simple home-made pear and brown sugar compote. Pears are at their best in the Autumn and Winter seasons and they go really well with warming winter spices.

The variety of pear is less important, but make sure they are very firm. When making the compote, also be careful not to over-cook them. The texture of the wet, slightly crisp pear against the soft, slightly sticky, alcohol-soaked cake is to die for.

Can I use other fruit?

Although I have never made ginger trifle with other fruit, if I were to do so, I think I would choose to add layers of citrus. Orange and/or lemon would blend beautifully against the ginger. The magic would surely dance on the taste buds… (makes a mental note to make and eat as soon as possible…)

Add a little booze to your Winter Gingerbread Trifle

Surely no trifle is complete without a little added tipple and this one is no exception. But when first making pear and ginger trifle, which tipple to add was a bit of a conundrum. Whilst wanting to work with whatever was to hand in the drinks cupboard, I wasn’t sure of what bottle might complement ginger best.

When unsure, it is always best to test! And several tasters of liqueur-soaked cake cubes later (which may have been a little more alcohol than cake), the taste buds settled on a happy dose of Cointreau for each serving. Of course, you may have other ideas… Feel free to make your own trifle tipple test-lab… It’s fun regardless of what you end up choosing.

How to Decorate Pear and Ginger Trifle

As with any good trifle, this recipe has the standard custard and whipped cream layers. But for extra pizazz, it has been topped with a sprinkling of my favourite (crushed) home-made Ginger Biscuits. If you haven’t made these biscuits, I really recommend them. They are incredibly crunchy, gingerly-warming and totally delicious. And they are the perfect addition to the trifle to give a contrasting crunch against the pillowy soft decadence of the cream, custard and alcohol-soaked cake.

For special seasonal, show-stopping wantonness however, this ginger trifle is also topped with a sparkly twinkle of edible glitter and a very special Hotel Chocolat Chocolate Gingerbread Man. This ginger-infused cutie makes each trifle look as truly classy as it tastes… Decadent, delicious, sumptuous, divine!

The eagle-eyed among you may have spotted a darker coloured trifley imposter in the photos. Your eyes have not deceived you… On the occasion when these photos were taken, Miss GF (then aged 10) decided she would prefer a non-alcoholic Black Forest Trifle. (with additional ginger biscuits and a chocolate ginger bread man, of course). And being the Christmas holiday, I obliged!

For everything else, click the link to see our gluten free Recipe Index… 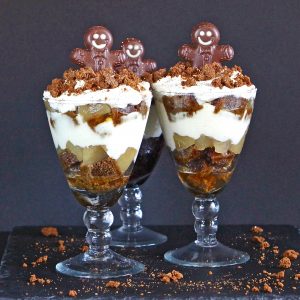 Pear Compote (make ahead of time)

The rest of the trifle + putting it all together

Putting the Trifles Together

* Note: nutritional information is an estimate & may vary according to portion size/ingredient variants. Ginger Cake and Ginger Cookie Recipes (gluten free) used by Gluten Free Alchemist : Dark & Sticky Jamaican Ginger Cake Jamaican Ginger Cake Ginger Cookies/Biscuits This recipe contains alcohol. If you use alcohol, it is only suitable for adults, however the addition of alcohol is optional. If serving to children, leave out.

Bored of the same old gluten free offerings? I was