Viennese Whirls take me straight back to childhood. Light, melt-in-the-mouth, buttery biscuits filled with a sumptuous layer of jam and buttercream. When they were on the Great British Bake Off a few years back, I realised we needed a version that was Coeliac safe and actually tasted like the real deal. It was the kick I needed to work on a recipe for gluten free Viennese Whirls.

And guess what? I did it! It was no mean feat. Viennese whirls are known to be troublesome beasts. Add gluten free to the recipe requirements and all of my ingenuity and determination was required.

The hard work has now been done however. I share my recipe with my love. For all of you who miss them too. And yes… they are a little tricky, but if I can make them, you certainly can.

On the Great British Bake Off, making Viennese Whirls was a ‘technical challenge’. As I recall, it proved to be… well… quite challenging. It quickly became clear that these delicious little morsels were not as easy to make as Mr Kipling would have us believe.

So exactly how tricky would it be to create perfect gluten free Viennese Whirls?

My first attempt was a complete disaster. Following Mary Berry’s recipe to the letter (with a straight replacement of gluten free flour) was clearly not the answer. Although the batter looked good and piped perfectly, no sooner was it in the oven, than it spread like a beige weed across the bottom of the baking tray. It was actually quite yummy crumbled on top of ice cream. It did not however, pass as a batch of gluten free Viennese Whirls.

To be honest, I knew there was no way Mary’s recipe would work with weight for weight substitutions. But it needed to be tested to understand how to de-gluten it.

Back to the drawing board… The recipe was re-worked to reduce the butter, and increase the cornflour. A drop of vanilla was added as well as a little extra icing sugar, as the extra flour upset the flavour balance.

It seems these changes did the trick. My second batch of gluten free Viennese Whirls held well. And… they were robust enough to (with care) jam, ice and sandwich. Yes, they are a little fragile, but according to GBBO, fragile is not in itself a ‘fail’. And hopefully Paul and Mary (or Prue) would be more than happy with my piping ‘definition’.

Having had many a ‘normal’ Viennese Whirl in my earlier life, I can be proud of my efforts. These particular melt-in-the-mouth treats may be slightly larger than intended, but they taste just as remembered.

How to pipe Viennese Whirls

Whether gluten free or not, piping Viennese whirls is a requirement of tradition.

To get a consistent size and shape, it’s best to work with a template of circles (of the size you want) drawn on card. Simply place underneath good-quality non-stick baking paper before you pipe and slide out before baking.

Use a large open-tipped star nozzle for the best swirls and a large piping bag. I always use the Lakeland disposable ‘grippy’ bags. Pipe (like you might for a cupcake) from the outside, round the circle, gradually swirling into the centre.

Once baked, make sure you let your biscuits cool completely on the tray before attempting to move them. They will be fragile… but that’s part of what makes them so delectably meltable.

Then… use a flat, fine edged flexible palette knife to very carefully loosen and lift the Viennese Whirls. And VERY gently lay half upside down and half upright on clean baking paper.

Dollop a drop of ‘loosened’ jam into the centre of each upturned biscuit and very gently spread towards the edges.

Use a large star nozzle to pipe a swirl of butter icing on top of the jam, before very carefully placing a second (un-iced) biscuit on the top.

Gently ease the biscuit on with a careful twist. Squeeze too hard and the Whirls may break.

Did you spot the ‘handle with care’ message?

There’s been lots of GBBO inspiration over the years… Here’s a few other inspired recipes that have been developed as a result of various ‘bake alongs’ :

So here it is… My gluten free Viennese Whirls recipe. I really hope you love them. I always love hearing when you’ve made any of my recipes, so don’t forget to let me know. Comment, or tag me on social media (links at the top) with your bakes. And don’t forget to rate the recipe.

If you are looking for more inspiration to cook and bake great gluten free food, why not also check out our Recipe Index. With over 400 recipes, there’s sure to be something to tempt. 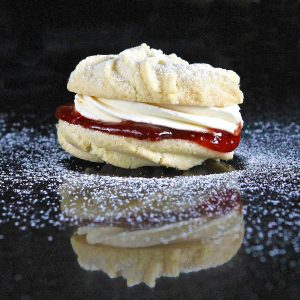 * Note: nutritional information is an estimate & may vary according to portion size/ingredient variants. Gluten Free Alchemist Flour Blend A can be found on the GFA Flours & Flour Blending Page. If using an alternative flour blend, the texture may be slightly different. Once filled, these Viennese Whirls will keep for a couple of days in an airtight container, however are best enjoyed on the day of making. If making ahead of time, the biscuits will last a few days unfilled. Fill on the day of use.

Previously shared with : Free From Fridays with Free From Farmhouse; Cook Blog Share with Hijacked by Twins.