This is the simplest ice cream I have ever made. No churning required, yet amazingly creamy, soft and luxurious. And it is full of one of my favourite garden ingredients……. rhubarb!

Last month I missed the random recipe challenge and even though time this month has been extremely limited, with school holidays and a lack of the usual routines, I was determined that I was going to enter for August. I love Random Recipes, the brain child of the lovely Dom over at Belleau Kitchen, because it encourages making recipes which otherwise would not get a look-in and also forces me (more or less) to try and stick to a recipe (not an easy task for any food blogger and one which I find particularly difficult).

This month, Dom has paired up with Kavey who hosts the Bloggers Scream for Ice Cream challenge over at Kavey Eats, for a wonderfully random ice cream challenge. Although I do have a few ice cream books I could have selected a recipe from, I decided that this month, my random pick should come from the many recipes I have bookmarked from other food blogs. There are some amazingly talented and creative cooks out there and I figured that if I have bookmarked a recipe, it is because it deserves to be made. So why not randomly select one and use it?

I organise my bookmarks into recipe groups and have about 39 bookmarked in the ‘ice cream and ices’ list. Not being a book, it excludes the possibility of opening a random page, so to ensure a random selection, I took another book off the shelf and opened it (page 74), then counted my bookmarks from top to bottom and then started again until I reached the allotted number.

And what did I pick? No Churn Rhubarb Ice Cream that I had bookmarked from The Baking Beauties over in Canada. Nice choice!

Actually………. it couldn’t have been a better choice, on account of the large rhubarb plant growing in the garden that needs eating before the winter sets in. I did have it earmarked for a couple of sponge and crumble recipes, but what the hell…… I’ve never had rhubarb ice cream before and the plant is still growing, so I’m sure it will do me the courtesy of a few more stalks before it gives up for the year. It’s the least it can do given that I have ensured it adequate water and care during the summer heat.

I have slightly changed the ingredient quantities in the recipe to convert easily to UK-available ingredients, but otherwise, I have kept true to the recipe.

If you like rhubarb, this ice-cream is delightful. Very rich and creamy, wonderfully tangy, peppered with little bites of fruity, fleshy rhubarb and sweetened to perfection. It is soft enough to scoop straight from the freezer and melts into a rich gooey rhubarb cream, which would be amazing on its own.

If you read Alida’s post on How to Spot a Good Quality Ice Cream over at her beautiful blog My Little Italian Kitchen, you will know that quality ice cream should :
taste of the flavour you have picked
leave you with a good aftertaste
melt quickly
not have funny colours
not leave a feeling of greasiness on the palate…….

Now I would have guessed that a no-churn ice cream might not score that well, but this one comes up trumps on all criteria……….. So I guess it’s pretty good! It would be interesting to try churning it next time to see whether it makes any difference………..

Although the ice-cream needs nothing else, I served mine with a drizzle of honey. Not just any old honey, but locally-sourced honey infused with vanilla, which I picked up at a local summer festival. The honey, produced by a Kent company : Nuts 4 Honey, is all organic and comes both naked and flavoured with anything from cocoa or coffee, to ginger, cinnamon, nuts and fruit. It is absolutely delicious and drizzled over this ice cream, adds a natural, sticky sweetness which is divine.

If I wasn’t doing a random recipe challenge, I might have substituted some of the sugar in the ice cream for natural honey or maple syrup and possible added a shake or two of cinnamon. Maybe next time…….

And on account of the back-garden rhubarb and drizzled locally-bought honey, I am also entering it into August’s Shop Local hosted by Elizabeth at Elizabeth’s Kitchen Diary. The walnut ice cream spoon is also made by a local artist, Ben Kelly at Bo Ku (who makes beautiful things from wood) and was bought from a local cafe Quite Contrary, which is run by a friend of mine.

See how well it melts and how creamy it looks? I took these photos first thing in the morning……… Darn…… Ice cream for breakfast again!!!!

Previous Post: « Banoffee-Coconut Crunch Trifle – gluten free
Next Post: Double Chocolate Cupcakes (with a hint of ginger) and a leaving do »

Are Creme Eggs your thing? I’m definitely a min

Who fancies making a super-easy no bake Creme Egg 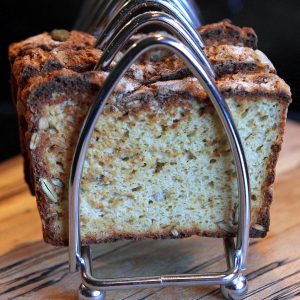 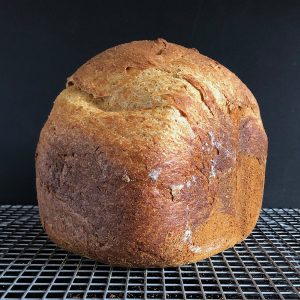