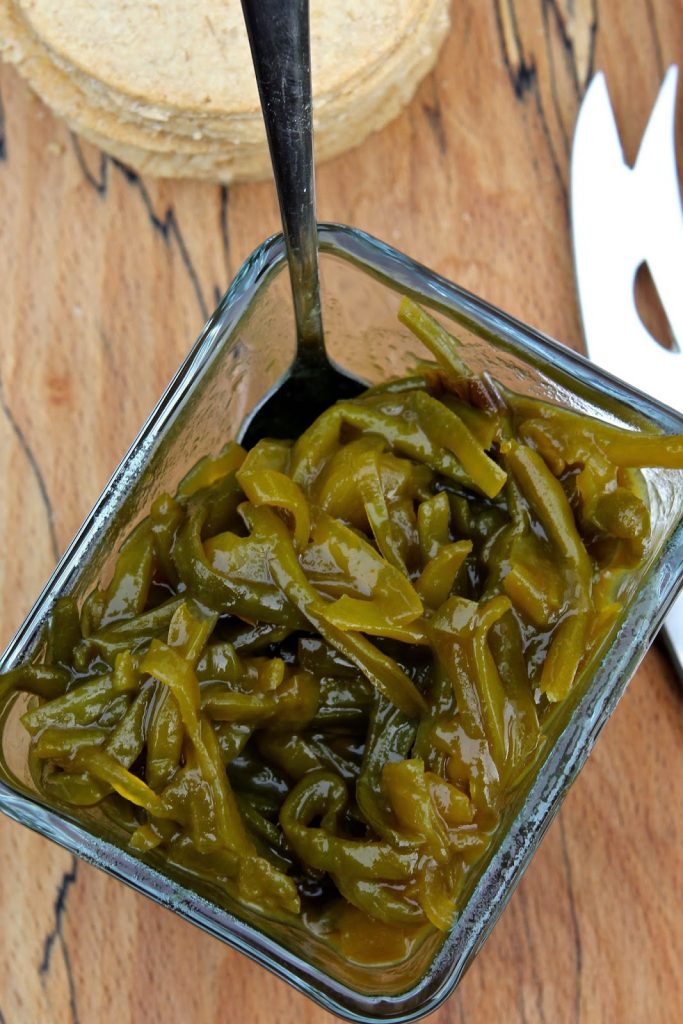 It’s October and we are still picking beans! I have never known a year like it. Usually the beans in our garden have long gone by mid-August, but this year, there seems to be a never ending supply……. and they are still as succulent as they were in June……….

I’m not complaining, believe me…… We love beans. But we have been eating them almost every day for about four months and the freezer is full with them too. With such a glut, I have had to find new ways to use them……. Bring on the chutney!

Years ago, I was given a jar of green bean chutney which was so delicious, I have been trying to find the recipe ever since. I had a good memory for what it looked and tasted like, so have been on an internet search to track it down. The fact that years ago, was before the existence of the internet seemed irrelevant……. I knew it would have found its way into cyberspace. 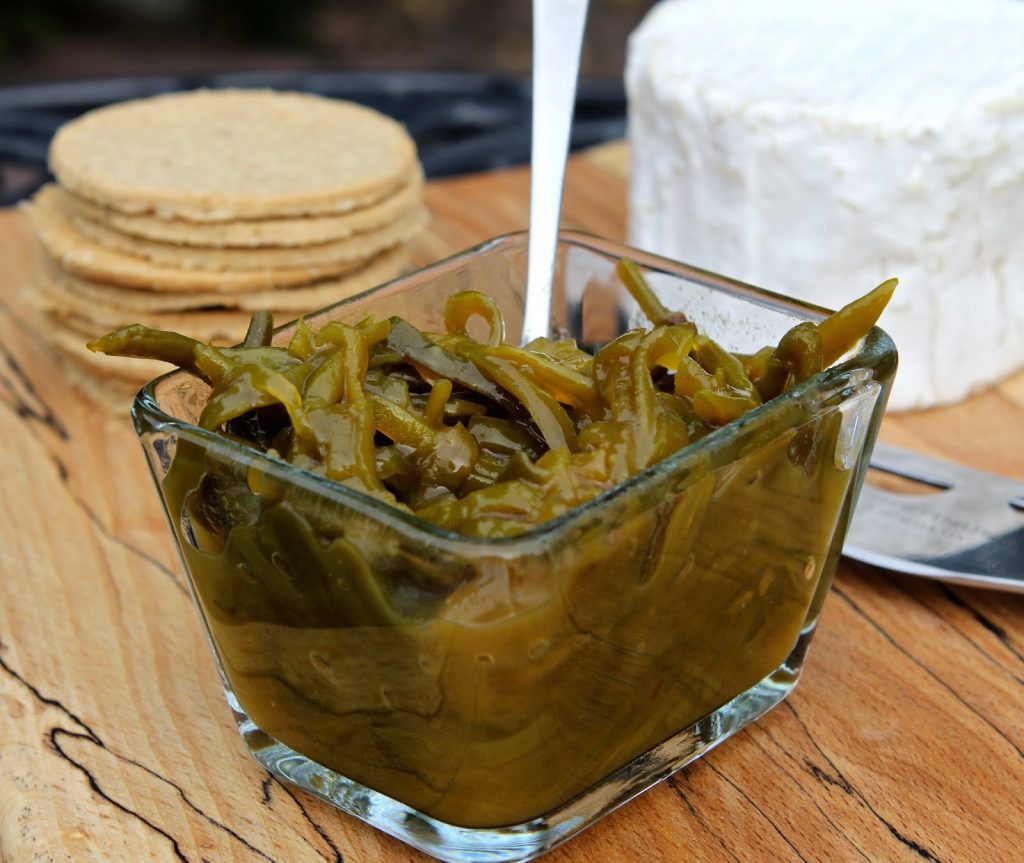 I had bookmarked a couple of recipes which I thought would taste like I remembered. The most likely suspect was a Delia Smith recipe, which seemed logical given the ‘era’ that I had eaten it. I am not sure whether it should be labelled a pickle or a chutney? Is there a critical difference? But as I recall it being called a chutney when given to me years ago, I am sticking with that in the interests of nostalgia.

I have changed the recipe a bit……… It lists using runner beans (I only had French); I’ve thrown in a bit of chilli; used a combination of white and red onions which I have also caramelised slightly; taken out the addition of mustard; and substituted the malt vinegar for a combination of cider vinegar and white wine vinegar on account of wanting to avoid any potential gluten issue that might be present with malt vinegar. Actually, the jury still seems to be out on whether it is safe to eat malt vinegar if you need to avoid gluten. Coeliac UK suggests it is fine and that the barley gluten content is made safe by the fermentation process. In the US, they suggest malt vinegar is not safe. I found this article here to have some particularly helpful discussion on the subject. The Turmeric in the chutney adds a lovely aromatic edge and also enriches the colour. 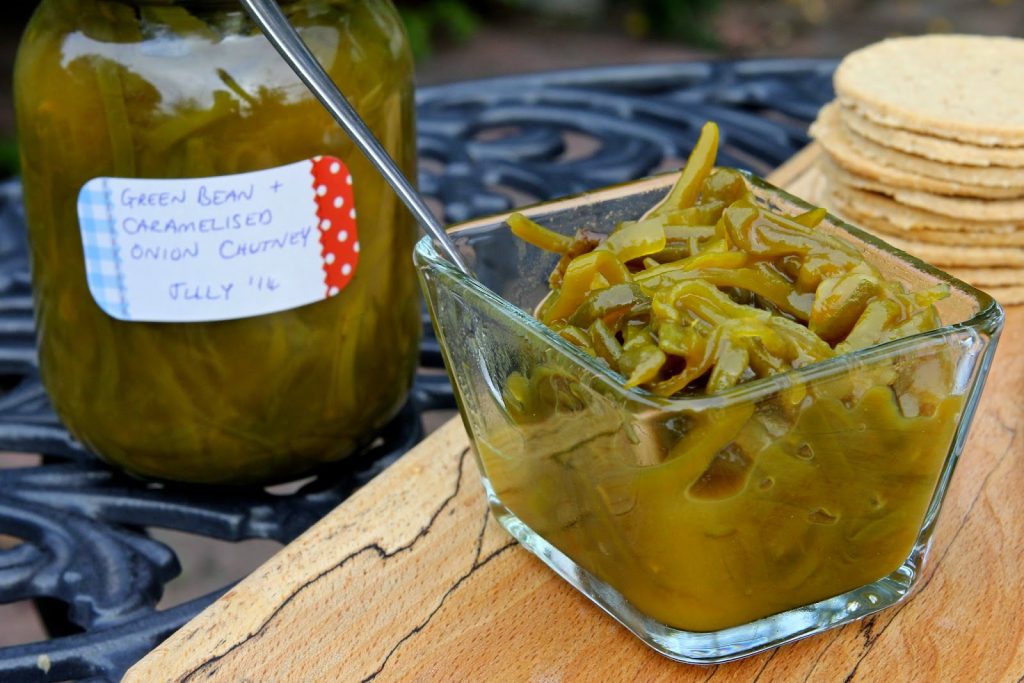 So actually…….. I guess I’ve pretty much massacred the original recipe. It does however, taste like I remember, only better. It is like a jar of sweet and sour green beans and makes a perfect accompaniment to cheese and crackers. But don’t expect to eat just a small spoonful. This is the kind of ‘chutney’ that you want a big pile of, because the beans are still in long juicy lengths and because it is very very moreish. I almost eat it as a side vegetable!

The chutney is best after being allowed to mature in the jars for a month before eating. I actually made this batch a while back. It is however, disappearing quick, and I may just have to snaffle some of the frozen beans from the garden for another batch. 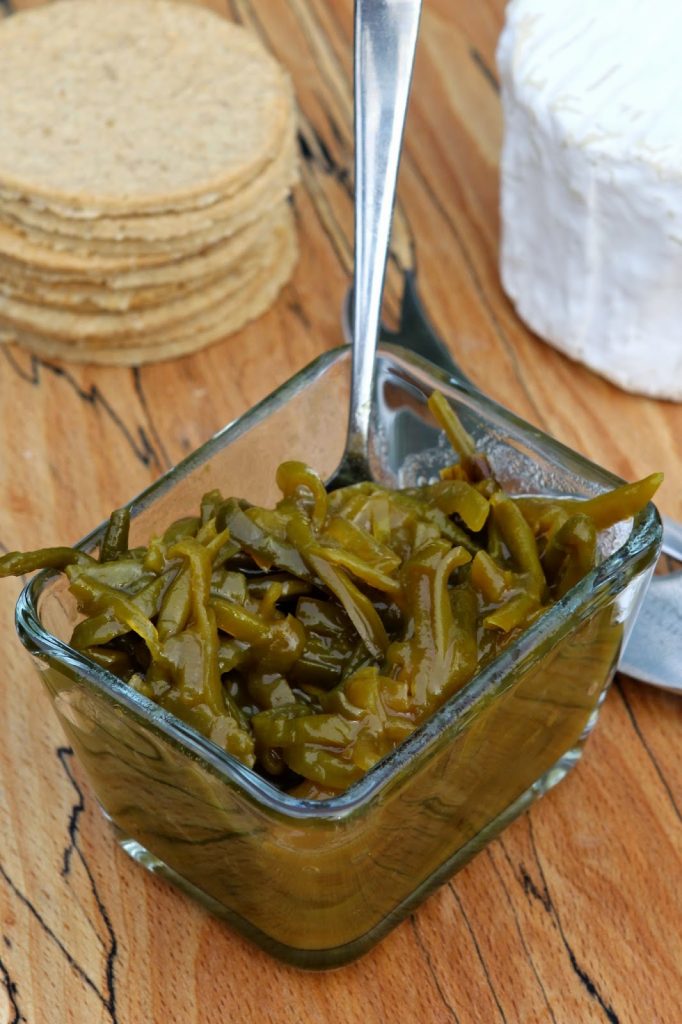 I am sharing this delicious chutney with a handful of challenges this month :

Extra Veg being hosted by Emily at A Mummy Too (on behalf of Fuss Free Flavours and Utterly Scrummy), which urges us to find ways of eating an extra portion of vegetables. The amount of bean chutney I eat in one sitting qualifies it for a goodly portion.

October’s Spice Trail, with Vanesther at Bangers & Mash. This month’s theme is preserves and pickles. There’s plenty of turmeric in here, which adds both flavour and colour and alongside the fresh chilli, brings the chutney extra vibrancy.

Bookmarked, guest hosted this month by Feeding Boys & a Firefighter on behalf of Jac at Tinned Tomatoes. Ok…… it’s a bit of a leap, but this one’s been bookmarked in my head for years…… it just took a while to track it down (and then de-glutenise and modernise it)!

After much reworking, I've finally cracked my reci

One for your weekend stews, soups and casseroles.

🤎 Real Chocolate Mousse! 🤎 One of my favouri

Just LOOK at that caramel 👀🤤 THIS is a BANOF

Always a privilege and an honour to judge at the @

Am I the only one who's had enough of the winter?