Whether you are doing ‘Veganuary’ or thinking about becoming vegan for the long haul, read my guide for surviving as a gluten free Vegan.

DON’T LOSE THIS Guide! PIN IT FOR LATER…

I’ve set myself a challenge… This month I’ve decided to be a gluten free vegan. For now, just the one month. Mad? Maybe!

Already Coeliac and already struggling to read every label in the supermarket to check whether I may be poisoned by gluten, the prospect of checking for any and all animal products seems daunting and to many, totally bonkers. So why the heck am I doing it?

Am I just jumping on the Veganuary band wagon? Well… actually no! For a number of months I’ve been feeling bloated and at times in pain, despite a very strict gluten free diet. I’ve considered cutting out any number of things to see what makes a difference. But my gut instincts (no pun intended) tell me it may well be dairy.

I LOVE dairy. The idea of cutting it out of my diet fills me with dread. But for months, I have tried to persuade myself that this is what I need to test. I am clearly not very persuasive… I have failed!

Veganuary is proving to be a motivator. An opportunity to enter the annual national movement that says ‘you got this’! Try it for just one month… No strings attached. You too Kate… can become a gluten free vegan AND survive!

A Bit of a Detox

Like many others, I have also been pushing the boundaries of excess over the Christmas and New Year period. Too much rich food. Perhaps a little too much alcohol. Definitely too much sugar and fat. And my body is telling me it’s time for a break. ‘Give me a bit of a detox’ it’s shouting…

Who am I to deny my body… the finely tuned machine that keeps me alive… the little bit of attention that it is demanding? And (in addition to a recent determined return to the gym), trying a gluten free vegan diet (or ‘doing’ Veganuary’) seems a fair trade-off.

Why do Other People ‘do’ Veganuary?

Is anyone else out there doing a vegan gluten free diet for January? I’m sure your reasons are many and varied. But there is no denying that we are being increasingly encouraged to consider the wisdom of a vegan diet for an array of reasons.

Some people think it will help them to lose weight. Others believe it will give them longer lives. Yet more are worried about animal welfare. The organisation ‘Veganuary’ implores us every year to ‘take the pledge’ to go vegan for one month, hoping it will be the ‘light-bulb’ experience that leads us to permanent Veganism.

There is no doubt that arguments are raging internationally about climate change and the challenges of sustainably feeding the global population. We are consistently being educated about our personal impact on the world through continuing to eat meat and animal products. The message is blatant : ‘one of the biggest contributors to climate change comes from ‘dietary greenhouse emissions”.

I’ll be honest… as a Coeliac, I am really concerned about the impact on personal health of giving up critical nutrients gained from dairy, fish and meat in the long term. I don’t want to spend my days popping supplements for things that are available to me in food. But I do get why we should be worried… And I respect that concern enough to try to reduce my personal impact, by eating plant-based on a more regular basis.

What can a Gluten Free Vegan Eat?

So let’s cut to the chase. It can’t be easy being vegan AND gluten free, right?

One week in and we’re doing fine! I say ‘we’… Miss GF has joined me enthusiastically in the gluten free vegan challenge… Mr GF is somewhat scathing about our dietary shift and has chosen to play no part.

what are we eating on our gluten free vegan month?

As a family who cooks most meals from scratch (and who already reads every label for ingredients), shopping and adapting has felt pretty easy. Normally, most of our meals have a carbohydrate base, with an element of protein and vegetables alongside.

The Carbohydrate Base for a Gluten Free Vegan Diet

The carbohydrate base has changed very little, bar extra careful reading of labels to check for (predominantly) dairy, egg and honey. Our meals still have a base of gluten free pasta, potatoes, sweet potatoes, bread, pastry, noodles, rice, veggie rice, corn ‘cous cous’; quinoa, lentils, etc. Many of these ingredients are naturally gluten free, and actually, there are a surprising number of vegan gluten free baked and processed products in the supermarket too.

Here’s just a handful of what I found on a quick shop in my two local supermarkets and in my larder :

I have also been working for the last few months on developing a really delicious, easy-to-make, comparable to wheat, Vegan Gluten Free Wholemeal Bread recipe. And I’ve done it! I am now enjoying the fruits of many many hours of labour and am enjoying daily, a really healthy nutritious loaf.

Fruit and veg needs no labels. It’s all naturally gluten free and vegan. So you can eat as much of it as you like. And it’s surprisingly filling and sustaining. Just remember to vary how you season and cook it so that it doesn’t ever become boring… Boil, bake, fry, grill, barbecue, roast, eat raw… the possibilities are endless and delicious.

Adding Protein to a Vegan Diet

This is the biggie for us at GFHQ. The need to cut out regular meat, fish, eggs and dairy from our gluten free diet is critical to doing Veganuary. What to replace it with and still ensure the vital nutrients we need requires careful consideration. Having said this, the reality is that certain nutrients (in particular the B vitamins and vitamin D, calcium, iron and zinc) may quickly become deficient, so it will be important regardless, to keep a check and ensure we seek out fortified foods and supplements. Check out this article on 8 nutrients we need to watch for… And also this helpful article from Coeliac UK.

Some of the best natural gluten free protein sources that we already eat lots of (some of which are complete proteins) include Tofu; Quinoa and Teff; lentils; gluten free oats; nuts/nut butters and seeds; chia; soya (including Textured Vegetable Protein TVP); chickpeas and beans (including houmous); and peas (yes… peas!). Other unprocessed ingredients that are good protein sources and naturally gluten free include Tempeh (from soy); nutritional yeast; hempseed; spirulina; amaranth and wild rice.

There is also an ever-growing choice of processed Vegan alternatives to meat, fish and cheese available in supermarkets and whole-food shops, many of which ‘mimic’ and are named to reflect their animal counterparts. I actually find this a little weird. Why we seem to have a need to seek veggie alternatives that are named to ‘taste like meat’ seems to contradict many elements of veganism. But hey… if facon, qwrkee jerky, vegan fish, vegan chorizo, soy beef, vegan tuna, vegan chick’n, fishless fillets and free from meat burgers are what helps you feel the world is still ‘normal’, then they are all out there to be had.

And since we are doing a gluten free vegan Veganuary, it seems like a good opportunity to see what’s out there that is also safe for the Coeliacs amongst us… As always, reading labels to check for hidden gluten is crucial. BE AWARE… Not all Quorn products (even the basic ones) are gluten free.

Although cooking everything from scratch would be fantastic, in the real world, time is precious and trying a gluten free vegan diet definitely takes better planning. So just like any other ‘normal’ household, the ready meal still makes a not-infrequent appearance at GFHQ. Here’s a few options that I have found in the big supermarkets.

Doing Veganuary doesn’t mean giving up everything… does it? I’m not sure I’d survive without a few treats in my life. And going gluten free vegan doesn’t mean being a total angel.

There are loads of dessert and sweet treat recipes which are gluten free as well as vegan if you love to make your own (I’ve given you a starter list below). But there is also an increasing range of gluten free vegan treats available to buy in the supermarket too…

As with all gluten free shopping, check labels for potential gluten-risk.

If you want to pep up your veg, tofu, tempeh and carbs, remember to add plenty of seasoning, herbs, spices, stock and flavourings.

Tomato passata makes a good sauce base, as does vegan pesto, coconut milk in curry, sesame tahini, etc. If you don’t feel too confident about making your own sauces and seasonings, there are plenty to be found in the shops (and not always in the obvious ‘free from’ section). Usual gluten free rules apply!

Make Your Own – Recipes for a Gluten Free Vegan

Happy to cook and bake? Then there is loads of inspiration and plenty of gluten free vegan recipes out there. And as we are doing Veganuary here, I’ve done some of the searching for you. Here’s a list of gluten free vegan recipes that will give you a starting point from Gluten Free Alchemist (we even have a Vegan + Gluten Free photo index) and from fellow bloggers around the web…

Don’t forget to keep your eye on Gluten Free Alchemist for any new recipes. We now have a dedicated Gluten Free-Vegan Index too.

So there you go! If you too are doing a gluten free vegan Veganuary, I’d love to hear from you. What are you eating and how are you managing? Ping me a comment below or get in touch via email or social media. #glutenfreealchemist. x 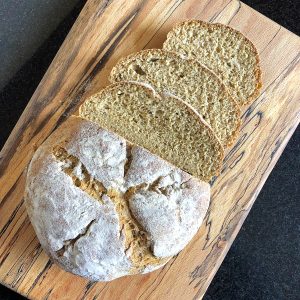