DON’T LOSE THIS RECIPE. PIN IT FOR LATER…

Remember McVities Jamaican Ginger Cake? Sticky, dark, rich and temptingly warming? Well this is my gluten free ‘copycat’. Except this recipe is better. It’s home-made and free from gluten… And that means not only is it the real deal, but we can eat it.

I know many of us Coeliacs have a gluten free ‘wish list’. Well… Jamaican Ginger Cake was definitely in my top ten gluten free ‘wants’. Despite lengthy searches however, finding a ‘free from’ commercially-available variant proved elusive… Which meant an absolute need for recipe development.

And because I hate the thought of anyone else being deprived, I’m sharing this perfectly-flavoured, stickily gorgeous, great British classic with you too.

Is it easy to make gluten free Jamaican Ginger Cake?

Oh yes! I’ve made this gluten free Jamaican Ginger Cake as simple as possible. This recipe requires no skill whatsoever. Easy as pie? No… It’s easier than pie. You literally mix your dry stuff, melt your wet stuff and beat it all together with an egg. Seriously, I kid you not… the most difficult part is leaving it in the oven for an hour, whilst the spiced aroma wafts through the air around you and your stomach rumbles uncontrollably.

What is this ginger cake ‘free from’?

Being a Gluten Free Alchemist recipe, it goes without saying that this Jamaican Ginger Cake recipe is gluten free. But it is also made to be free from nuts and rice. The recipe uses my GFA rice-free blend B, meaning that the batter is not only beautifully smooth (no ‘ricey’ grit or dryness here…), but is free from any latent arsenic risk.

The recipe can be adapted to be dairy free too. All that is needed is a straight substitution of the butter for a good like-for-like dairy free alternative.

This is not my only foray into Jamaican Ginger Cake development. I created my first recipe back in 2016 after a work colleague needed a gluten free version to make Gingerbread Stuffing at Christmas. It was a great cake… Deep and sticky and very like the old glutenous McVities sponge I remember. But some recipes just need to be taken one step further, not only for best textural and flavour improvement, but to make them even more accessible to my free from friends.

The previous gluten free recipe contained ground almonds and used light brown sugar. Of course, there’s nothing wrong with either of these ingredients. But in the spirit of progress I decided to create a Jamaican ginger cake that was darker, more gingery, nut free, rice free and optional dairy free.

It was worth the effort… Jamaican Ginger Cake mark 2 has the perfect texture… Not over fluffy or over-dense… It has the characteristic back-kick of cinnamon-infused ginger which warms the palate and gives a big internal winter hug… It is expectantly sticky on the teeth and sat side by side with its wheaty cousins, it competes with ease. Actually (in my humble opinion) it would probably win hands down.

How do I know? Because it has been tested on friends, family and colleagues who have been spotted sneaking back for an extra slice or three… and who (mostly still being gluten-eaters) have compared it more than favourably.

Gluten free Jamaican Ginger Cake makes the perfect tea time treat all on its own. However, at GFHQ, we like to play with our cakes and push them into other recipes as well.

As mentioned above, Jamaican ginger cake forms an amazing base for a Christmas stuffing. Although originally a Nigella Lawson recipe, I adapted it for a friend some time ago and we now have a gluten free version of Nigella’s sweet Gingerbread Stuffing on Gluten Free Alchemist.

As with all sponges in our house, ginger cake is no stranger to trifle either. And for quality assurance (of course), I made sure to check this particular Jamaican Ginger Cake’s trifle versatility with a re-run of my Winter Ginger and Pear Trifle. It’s a trifle that will seriously WOW at dinner parties… And I can confirm that having tested it scrupulously, it is unbelievably good.

Will YOU try my gluten free Jamaican Ginger Cake?

Don’t take my word for it however. Give Jamaican Ginger Cake a try at home.
If or when you do… Please let me know how you get on. Leave a comment below and leave a recipe rating. Even better… Take a quick photo and tag me on social media (links at the top of the page) so that I can swoon over your efforts and be proud of both our success. Don’t forget to use the hashtag #glutenfreealchemist. 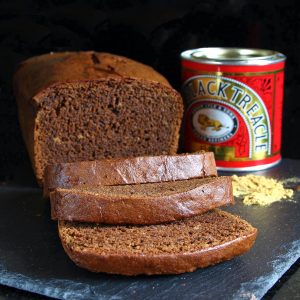 * Note: nutritional information is an estimate & may vary according to portion size/ingredient variants.Gluten Free Alchemist Flour Blend B can be found on the GFA Flours & Flour Blending Page. If using an alternative flour (particularly one which is heavily rice-based), the texture may be slightly different and more liquid may be required.

Previously shared with: Baking Crumbs with Jo’s Kitchen Larder and Apply to Face Blog; Love Cake with Jibber Jabber; Fiesta Friday #266 with Angie, Life Diet Health and The Not So Creative Cook 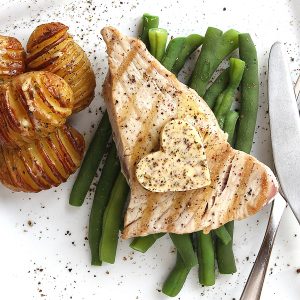