Don’t miss out on Nigella’s Gingerbread Stuffing just because you are gluten free… I’ve done the hard work and de-glutened this delicious seasonal recipe so we can all enjoy it!

Doesn’t Gingerbread Stuffing sound amazing? A little sweet and sticky… Warmingly spiced… And definitely decadent as an alternative to sage and onion on the Christmas table.

Actually… it’s not my recipe… It’s from Nigella Lawson. But a few years back, a colleague of mine told me her gluten free mother would feel so left out when everyone else got to eat it at Christmas, that I set about making a gluten free version for her.

It was more complicated than anticipated. The original Nigella recipe requires ‘2… good shop-bought gingerbread loaves (such as McVitie’s Jamaica)’. But anyone who is Coeliac knows that this, in gluten free form, is a very rare find… It is certainly not a packet cake available in the supermarket.

Actually… At Gluten Free Alchemist, we now have TWO recipes for ginger cake. The first and original Gluten Free Jamaica Ginger Cake that was developed at the same time as de-glutening the stuffing… And a subsequent second Jamaican Ginger Cake recipe, which was additionally free from nuts and rice (made with my gluten free rice-free flour blend B).

Both are fabulous cakes… perfectly ginger… sticky… dark… delicious. They are both optional dairy free… And either can be used for the Gingerbread Stuffing recipe shared here.

The ginger cake was the first stage of the process. But given that the cake was to be used for gingerbread stuffing, the stuffing also needed testing. I needed to know that both the gluten free cake worked for it. And… to know that the stuffing tasted good-enough to be worthy of putting on the blog.

The recipe shared here is actually for half of Nigella’s amount. It’s what I made and there still seemed to be masses of the stuff. If you have a huge family and loads of visitors for Christmas, then you may want to increase the quantity… But a little goes quite a long way.

The gingerbread stuffing is surprisingly meaty with bacon, but it was also quite sweet. If you want to make it less sweet, simply add a little less cake. To be fair though, it was trialled at GFHQ without the Christmas turkey. So, there was little to ‘temper’ the sweetness. Alongside a succulently cooked bird and all the extra trimmings, it is surely divine…

This recipe has Nigella stamped all over it. I quote… “Sometimes, it makes sense to use one’s obsessions to advantage. I know that most people don’t have trivial light-bulb moments when the notion pops into an already food-filled head to make a stuffing in which crumbled gingerbread cake replaces breadcrumbs, but that’s, unfathomably, how my mind works.” (Nigella Lawson)

And if you are thinking about Boxing Day breakfast already? I can confirm that gluten free gingerbread stuffing makes a fantastic sandwich… Especially when made with earthy and delicious Gluten Free Alchemist Wholemeal Bread (whether hand-baked or from the breadmaker). I am already dreaming of how amazing it will be with a slice of turkey and a sausage wrapped in a hot, fresh, soft gluten free Roti Flatbread too…

Will you be making gluten free Gingerbread Stuffing?

So, here’s my de-glutened Nigella gingerbread stuffing recipe… Do let me know if you try it… Leave a comment below or tag me on social media (links at the top of the page). I always love seeing what you’ve been making xx 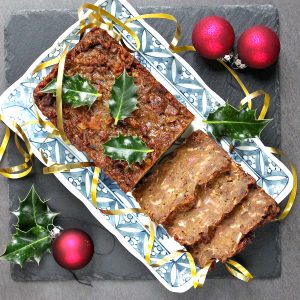 * Note: nutritional information is an estimate & may vary according to portion size/ingredient variants.I found the stuffing recipe to be quite sweet. It is fine however to reduce the amount of cake added (reduce by up to 100g) if you wish to de-sweeten the recipe.There are two gluten free Jamaican Ginger Cakes on Gluten Free Alchemist that can be used for this recipe (both are optional dairy free): 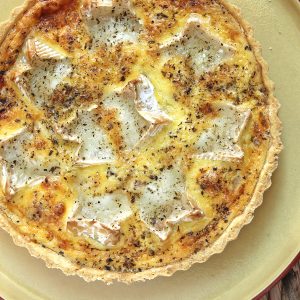 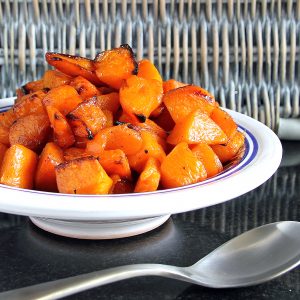