I am still enjoying the cherry season and am working my way through lots of tasty ways to use them.

Last weekend, I found a spare chocolate cake sponge lurking in the freezer, which saw me and begged me to use it. I had to oblige, so I decided it must be time to make another trifle………………. And another opportunity to combine cherry with chocolate, in the form of a Black Forest trifle.

The better known Black Forest gateau is a cake which has its origins in Germany and combines layers of chocolate cake, cream and cherries, often with a traditional liquor soaked in. For as long as I can remember however, it has been a bit of a party cake in the UK. Very popular in the 1970’s (which makes me feel really old), I remember with nostalgia its being produced for celebrations, party buffets and special meals. If my memory serves me right, it was also one of the first popular frozen cakes that you could buy from the supermarket at the time when large freezers first started finding their way into people’s homes and families looked to convenience as a way of life.

Perhaps because (at the age of about 10) Black Forest gateau always seemed such a grown up cake, its combination of chocolate sponge laced with alcohol, cream and cherry sauce has since had an enduring fondness for me.  In tribute, last weekend I decided to try and make a trifle version.

I have to admit it was a rather lazy effort……………… Having found the frozen left over chocolate cake (which had originally been made from the recipe in this post), the trifle was thrown together in double-quick time.

I did make a fresh chunky cherry sauce to spoon over the sponge, which I had also soaked with an alcoholic drizzle of Amaretto (almond) liquor. I love the combination of cherry and almond as much as I love cherry and chocolate, so for me, this trifle really is a double delight. I whipped up a rich Mascarpone custard using good quality bought vanilla custard and Mascarpone and used this to layer the sponge, finally topping with some freshly whipped cream sprinkled with chocolate shavings and a dusting of freeze-dried cherry powder.

For my daughter I made a separate trifle minus the alcohol and (at her request) drizzled some chocolate ice cream sauce over the sponge to replace the Amaretto.

Really quick…… Really simple……. and REALLY lush! Sweet, creamy, chocolaty, fruity, boozy, delicious spoonfuls of yumminess, that softly melt into your taste buds and leave a chewy cherry surprise. Turns out this is one of those desserts which makes you want to softly moan as you eat each mouthful. Feel free to do so…………… but only on your own or with good friends, or you might feel a bit daft!

You know what? I think this trifle is even better than those cakes I remember from my childhood……………

1 plain chocolate cake of your choice. I used a single 8 inch / 20 cm round cake layer from the recipe in this post, and it worked perfectly.

Approximately 5 tablespoons of Amaretto liquor (I used Disaronno), or another liquor of your choice (optional). Or a drizzle of chocolate sauce.

chocolate shavings or sprinkles of your choice to decorate 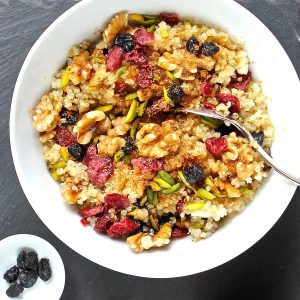