Crisp, melt-in-the-mouth gluten free gingerbread biscuits made into a sturdy Christmas Gingerbread House, decorated with colourful sweets and icing. Why not make yours for a show-stopping Christmas?

In the world of gingerbread estate agency, a gluten free gingerbread house is a rare and valuable thing. And it seems that at this time of year, the shops are filled with kits for the most beautifully decorated houses accompanied by gingerbread men, dogs, stars, tree gardens and even sleighs, but there is very little to tempt either Coeliac children or their parents. If anything, we hurry our intolerant children (and ourselves) past the colourful, tinsel-adorned displays as quickly as possible, for fear of tantrum and meltdown.

The answer? Build your own! And trust me… it’s way easier than you think and it will be guaranteed to bring fun and smiles to the whole family twice! In this post, I will help you learn how to make that all-elusive gluten free gingerbread house (fun #1). How you choose to eat it (fun #2) is up to you. Smash and grab; pick off the sweets first; dismantle biscuit by biscuit… it’s yours for the taking!

A Gluten Free Gingerbread House – How we got into house-building

So frustrated and miserable were we with Christmas gingerbread house disappointment back in 2014 (after 4 Coeliac years of putting up with a distinct lack of gingery housing stock), that at GFHQ we took matters into our own hands. At the time Miss GF was still only 9, but more than ready to learn the art of house-building.

Whilst well aware that most of the invitingly-boxed glutenous houses you see in the shops contain perfectly crisp, already cut gingerbread biscuits, plus sweets and icing ready to construct into your own magical, colourful Hansel and Gretel-style cottage, it was clear that if we wanted our own gingerbread real estate, we would have to go it alone. Sadly, even 5 years on from my original post, googling ‘gluten free gingerbread’ offers nothing for Coeliac-safe no-bake, ready to build houses. It’s a simple case of having to get your bowls and spoons out!

Back in 2014, I was lucky enough to win a Lakeland gingerbread house cutter set after making Halloween Cake Pop Spiders which I shared with a bloggers link-up called the Family Foodies Challenge. It seems that moment was serendipitous…

Until then, I had not even dared to replicate the home-baked Christmas gingerbread experience, only too aware that construction required cookies which were sturdy and hard wearing and definitely not the likely crumbly outcome Santa would destroy as soon as he set foot on the chimney.

Winning the cutter kit gave me the boot up the backside I needed to ‘get over it’ and rise to the challenge of making a gluten free gingerbread house to rival the best of the glutenous architecture on the housing market and taste as good, if not better. My little girl would miss out no longer!

Perfecting the basic gingerbread recipe for our stately home was a little less straight forward than planned. I’m no architect and getting a biscuit that was robust enough to stand, dry enough to last and spiced enough to deliver Christmas to the tongue, eventually took three attempts. Interestingly though, the final version didn’t require any ‘special’ extra flours, but instead worked perfectly with my bog-standard Gluten Free Alchemist flour mix A (which you will find at the end of my gluten free flours and flour blends page).

Putting the house together was pretty easy, although we needed two pairs of hands to hold the bits in place until the icing had set enough to take the weight of the biscuits. We struggled with the biscuit chimney a little, as the sides didn’t quite come together well enough, so we ditched that bit and improvised with a pretty marshmallow instead.

The spare pieces of chimney biscuit became an impromptu sleigh… My daughter had the genius idea of using two candy canes for the runners and left over biscuit for the seat. Once decorated, it really looked the part and I think is one of the cutest bits of the scene. Unfortunately, the only chocolate reindeer I could find were Lindt, which contains ‘no-go’ glutenous barley malt extract, so we made do with a pair of Scottie dogs…

This achievement was no mean feat. It was a two to three day construction job (by my reckoning, that’s about twice as long as the average new-build), which means a quality finish.

Decorating the gingerbread house was a blast!… Inventive, fun, and perfectly set up for creative family time. Because our house was not from an ingredients kit, we had to cobble together plenty of colourful gluten free fairy tale sweets to adorn its rafters and grounds.

Amazingly, Miss GF managed to find various stashes of sweets that she had hidden around the house which were ideal to complete our home-improvements. With a sprinkling of meringue to create the snowy winter experience, the planting of a few gingerbread Christmas trees in the garden, the laying of a path and oodles of glittery sparkles later, we had the perfect gluten free gingerbread house… all ready for Christmas Eve… I reckon Santa would have got quite a surprise!

The end result was something to be proud of… Miss GF enjoyed every shared minute, from mixing the dough, to eating the spare bits straight from the oven, helping to stick the walls together, and decorating our new property (even if it did mean giving up her precious sweets!).

The Art of Demolition – a gingerbread house devoured

It took a while to be persuaded that this gluten free work of art was, in all honesty, just food and with a heavy heart demolition began. It turns out the architecture was built to last and (as with all great buildings) probably would have stood for many centuries, had it not been smashed with a hammer and shared amongst guests.

Despite being sturdy, the biscuits had an amazing snap and were in no way tough, but instead had a melt in the mouth, comforting, creamy texture. The flavour was gingery warm, with a nice hit of seasonal cinnamon.

The smell of the gingerbread was pungently inviting… the addictive aroma that is so unique to the rich, dark, spiced molasses sweetness expected from a good gingerbread bake. Job done! And happy to stick two fingers up at all those tempting glutenous gingerbread offerings in the shops… Who needs gluten with a gingerbread house this special?

To make a gluten free gingerbread house, is not difficult, providing you have either the ability to be creative and cut your own house templates (I don’t!) or you have a gingerbread house cutter set. The cutter set that I used was one from Lakeland and was given to me back in 2014. The exact one sadly no longer exists, but Lakeland do still make a smaller version (complete with reindeer, sleigh and gingerbread man cutter). Link below.

For a house of a similar size to the one we made, I found a Kaishane cutter set which looks like it’s pretty cool. And I’ve also been coveting a kit made by Gracelaza, which size-wise is somewhere between the two. All three can be found on Amazon UK (see below).

If making the ginger biscuits from scratch still fills you with trepidation, I also came across a Lakeland gluten free gingerbread house complete with ingredients (just add butter, syrup and water), which is also dairy free, although does have a ‘may contain’ warning for soya, milk and nuts. It would make a fantastic stocking filler for Christmas holiday baking, if you don’t have time to go all-out before the big day!

And if you don’t want to make your own Royal Icing (for gluing the whole thing together), I’m pretty sure you can buy it in a tub now from the supermarket.

Other ginger Recipes Perfect for the Season : 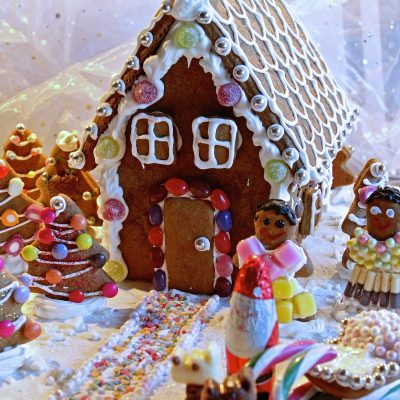 Times are approximate and the gingerbread house may take less or more time to make, dependent on (particularly) the complexity of the decoration. The flour blend used (Gluten Free Alchemist Mix A) can be found on the Flours and Flour Blending page on the website. * Note: nutritional information is an estimate & may vary according to portion size/ingredient variants.

Previously Shared (2014) with : Family Foodies (Bangers & Mash and Eat Your Veg); Alphabakes with Caroline Makes and The More Than Occasional Baker; Cook, Blog Share with Lucy at Supergolden Bakes; Recipe of the Week with Emily at A Mummy Too; Treat Petite with The Baking Explorer and Cakeyboi